I am currently reading a book entitled, “Darwins Doubt” by Stephen C. Meyer. It refutes the claim that Evolution is responsible for the biodiversity that we observe today and in the past. Many of us were taught to accept ‘Evolution’ as a fact. It is a Theory.

From my point of view, I see myself as a skeptic and I rely on empirical evidence to either agree with or refute any claim. However, writing extemporaneously—I am not a Biologist or a Geneticist—I tend to rely on my intuition and personal observations and musings as well as my analysis of the literature. Many of us have probably contemplated the origins of Life and wondered why is there so much diversity; so many different and amazing forms of Life on Earth. How and when did Life begin on Earth?

Since people were not there at the beginning to witness the first life forms, no one knows for certain that Life began from some kind of organic soup mixture that somehow formed the first living cell that was capable of reproducing itself and, through various processes ie. genetic mutation or epigenesis, was responsible for all the Life that has appeared on Earth and all the Life forms we have today.

The fossil record is quite extensive: over 100 million fossils are located in museums all over the World. So far, scientists, biologists, paleontologists, anthropologists, etcetera, have been unable to prove or find any intermediate or transitional links between one life form miraculously transforming or ‘evolving’ into another higher or multicellular life form. In effect, Stephen C. Meyer refutes the common orthodoxy of those who believe in organic evolution and makes a very strong case for Intelligent Design—a view and conclusion that I agree with. Stephen provides a cogent and persuasive argument for Intelligent Design.

The question I have is this: if the first life form was capable of thriving and surviving, why would it find it necessary to evolve into a more complex life form—let alone be the precursor to all Life Forms and biodiversity we see today? Moreover, we assume that some intelligence is responsible for creating the first computer or cell phone or wrist watch, but what about the incredible complexity of the Universe and Life? Does it not seem obvious to you that it had to have an Intelligent Designer? Someone had to build your house; it did not just appear out of nowhere with the structure intact.

Stephen C. Meyer’s argument against Neo-Darwinism is brilliant. He writes about the Cambrian explosion and questions why those in the scientific community—from many related and diverse disciplines— are so ideologically averse to the idea of Intelligent Design. He has his detractors but, as Science progresses, more and more people are beginning to rethink their hypotheses and re-evaluate their positions on Evolution.

We are living on a very beautiful planet, floating in space; orbiting an ordinary Sun. We are just the right distance from the Sun to allow for the existence of Life and the four seasons ( due to just the right tilt of the Earth on its axis); is able to create its own weather; has just the right mixture of gases to support Life in just the right concentrations; has all the resources we and other living creatures need in order to survive. Yes, the Earth and the Universe is a glorious creation and it—in my opinion—did not happen by accident. Thanks for reading.

The drill starts with the three F’s (in black O’s in the neutral zone) attacking the offensive zone 3v0. They attack the blue line, make a play behind the net and then get a shot.

The as the O forwards attack the net, the X players (green lines) step out and simulate a neutral zone regroup (started by the coach). The O defensemen gap up and play a 3v2 rush vs the X forwards with the X D joining.

After the O forwards get a shot on net, they backcheck the play into defensive zone coverage. Now the X’s and the O’s play 5v5 in zone.

The drill creates a transitional sequence offensively (neutral zone play) and defensively (backchecking from a shot on net). It forces the players to play in situations that arise naturally in a hockey game and make the correct reads and… 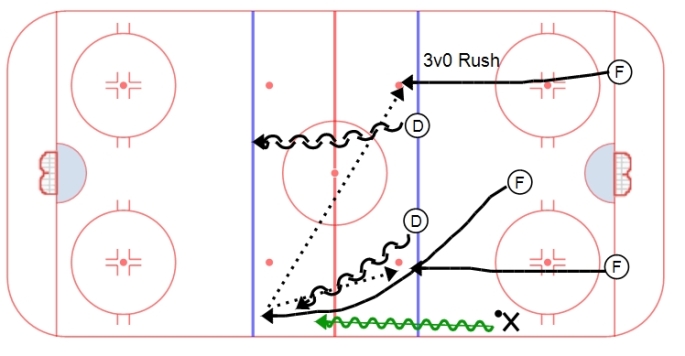 A backcheck/transition drill this week.

The drill starts with five O players stationary – two F’s below the goal line, one high F3 and two D on the blueline. X starts with the puck on the half wall.

On the whistle, X takes off with the puck. The D play the rush while F3 backpressures the puck carrier (or however you structure your backchecks). Either the D or F3 angle the puck carrier into the wall and force a turnover while the other player retrieves the puck and quickly transitions it up ice to either F. The defensive team then transitions to a 3v0 attack on net (D join the play).

To add another element to the drill, place two defensive D down low with the forwards below the goal line for a 3v2 offensive attack.

I really like this drill as a transition, gap, reattack game scenario for all…

A 2v0 multiple attack drill courtesy of Pat Norton (Head Coach at Tufts University). The drill starts with forwards in the four corners – you can start them in line with the dots or you can s…

Will the Sharks tie the series or find themselves on the brink?

Equipment is essential to the game of ice hockey and one of the most frequently overlooked components is that of the skate blade.  At every level of the game it is imperative for players to appreciate the importance of having their blades sharpened correctly.  It should be the goal of every hockey player to understand the elements of the skate blade and the value of having the blades sharpened correctly.

Having played in the National Hockey League for 13+ years and having coached at various levels from amateur to professional, I have a keen understanding of the advantages of having the skate blade properly sharpened.  As a player and a coach I have taken an interest in “what makes the best skaters in hockey the best?”  Not only have I realized the importance of a fundamentally sound skating stride but the underlying theme to success is often…

Immanuel Kant (1724-1804) is one of the most important and influential modern philosophers. He was born in Königsberg, the ancient, seven-bridged Prussian capital which became, in 1945 (after deportation of most of the German population to the Gulag archipelago), the bizarre Russian Baltic enclave of Kaliningrad. It is said that Kant never traveled further than 10 miles from his home town in all of his 79 years. It is also said that Kant, who was a lifelong bachelor and a caricatured embodiment of stern Prussian sensibilities, never deviated from his schedule by a single minute, so that local townsfolk could ‘set their watches’ by his daily walks. However unlikely (or apocryphal) these stories remain, they do not diminish the legacy Kant has left to the world of ideas. Considered somewhat of a ‘late-bloomer’, Kant’s first major work, the Critique of Pure Reason, appeared in 1781 when he was 47…

snipersskate
Create a free website or blog at WordPress.com.